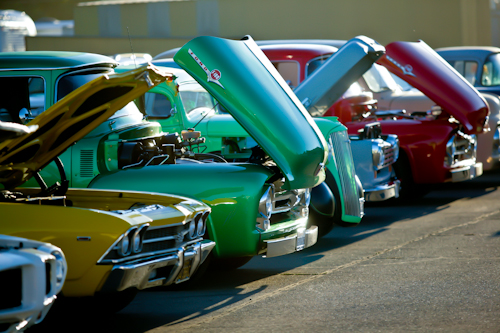 The f stop on the lens determines how great your field of focus (called depth of field) will be for that lens.  A telephoto lens with a large f stop (also called aperture) of 2.8 creates a shallow depth of field  (the green Ford is the only thing in focus).  This works great for portraits also .  The larger the opening in the lens the smaller the number, (don't ask me why) so f 2.8 is the largest opening for the lens I was using (200mm).  I was shooting whats called wide open.  In the photo below I was still shooting with a telephoto (85mm) but I closed down the aperture to f 9.  By stopping down to f 9 the depth of field increased so all the cars are in focus.  A little added benefit to stopping down is you get stars wherever there is a small light source.  Look at the reflection of the sun on the black Olds near the headlight. 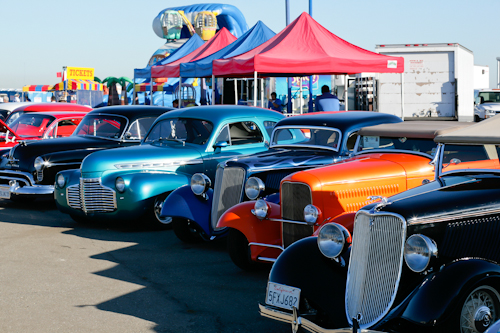 Promote Your Page Too

Mark V Reynolds
My passion is photography. I picked up my first camera at age 14 and, even after 39 years, I still get excited when I press the shutter button. Photography is a journey of self discovery, a way to express the artist inside without words. My life is about God, family and the pursuit of great photography. Thanks for stopping by.